After 10 weeks of incredible online entertainment the United We Stream project has left The Met for a well-earned rest, having raised an amazing £477,000 for local charities and good causes.

United We Stream GM was launched on 3 April by Night-Time Economy Adviser Sacha Lord and the Greater Manchester Combined Authority. The Met has been a proud partner and host venue for the project, with the UWS team producing 207 hours of streaming entertainment while based at The Met across 35 different productions.

Thank you ⁦@themet⁩. When we needed a base for https://t.co/0YgDfG5xEN, you stepped forward. The only thing you could possibly have done better, is to have not locked your beer fridges. Thank you! ⁦@StreamGm⁩ #UnitedWeStreamGM pic.twitter.com/FJPSeY7gTp

The ethos for United We Stream GM was to fundraise by providing quality and diverse entertainment from established and breakthrough Greater Manchester-centric talent, while encouraging people to stay in their own homes during the pandemic.

The impressive stats show that 7.5 million people worldwide watched events featuring 338 different performers from a variety of locations. While there were many performances beamed in from DJs and musician’s homes, The Met was a production hub for the GMCA Culture Team, University of Salford’s ICZ Media Production, Badger & Combes, and Modern English Digital who came together to create a formidable livestreaming team. But we were also able to do what we do best, with live music, comedy and performance coming direct from The Met’s main theatre with sound and light run by our own Technical Manager.

The busiest events included two Hacienda house parties reaching 2.5 million viewers. Stay-at-home ravers on the May bank holiday weekend watched The Met hosting classic sets from DJs including Graeme Park and DJ Paulette, as well as Manchester Camerata’s Hacienda Classical with vocalists in the venue playing along with a whole socially-distanced orchestra in their homes.

Highlights for The Met have included the chance to host events for and collaborate with Headstock festival and Manchester Mind for their commemoration of Joy Division’s Ian Curtis on the 40th anniversary of his death, which was hosted live from The Met by Dave Haslam and featured performances at The Met from The Lottery Winners and Iora. Contributions via video came from Elbow, The Killers and more.

Our evenings working with Manchester Jazz Festival gave us chance to share performances from brilliant artists who Met regulars may have seen before, like Kirsty Almeida and Baked A-la-Ska, and encouraged us to think creatively about how to present live bands in a socially-distanced space.

The timely and powerful Our City Speaks on 31 May, as part of Manchester City of Literature, was a collaboration with Young Identity and Contact Theatre which brought some of the city’s best known poets and spoken word artists together with brilliant emerging talent. Hosting the words of our patron Tony Walsh alongside newer artists who have previously used The Met as a development space like Mandla Rae and Roma Havers, was a privilege we didn’t know we’d get when we first closed our doors. 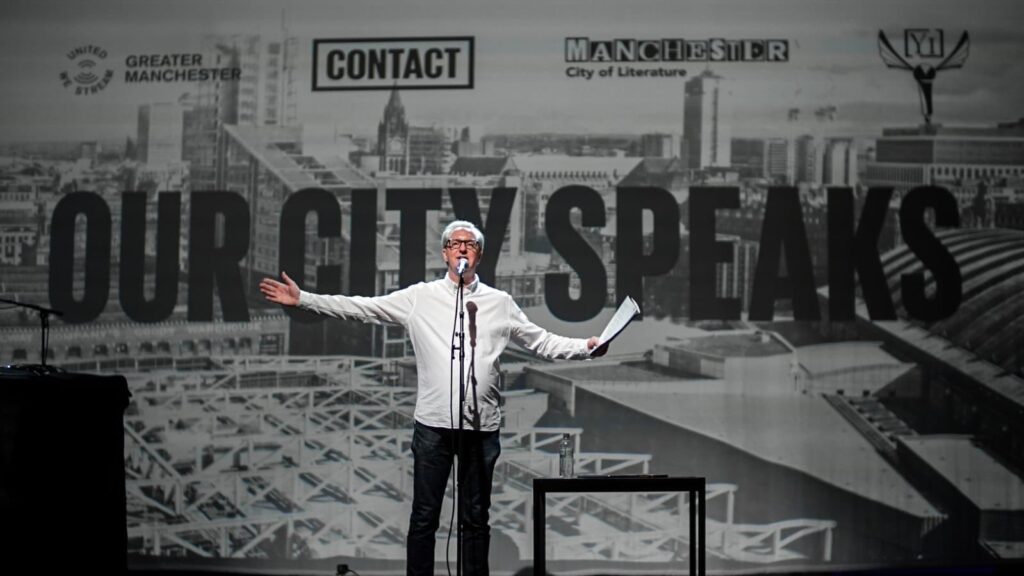 There are more highlights from this project than can be listed here. You can watch back many of the performances on The Met’s facebook page at https://www.facebook.com/metbury/live_videos, or on the United We Stream GM YouTube channel.

Donations are still being taken by the United We Stream Just Giving page while the team work on a series of special online events to build on the success of the first 10 weeks.

The team at The Met are incredibly proud to have played a part in the success of this important and influential project, which has come during the period when Bury was meant to be taking its place as Greater Manchester’s first Town of Culture. We’ll be looking forward to bringing the same level of commitment and expertise to our own future events, and can’t wait to collaborate with United We Stream again in the future.

Read more about United We Stream, including how to apply to the UWS solidarity fund, on the GMCA website.

Looking forward to coming back?

We can’t wait to welcome you to The Met again. In the meantime, there are a few ways you can help us be ready to reopen, from the comfort of your home.