The Met is Manchester’s Leading Cultural Venue of the year.

The Met has been awarded as Greater Manchester’s ‘Leading Cultural Venue’ at the This Is Manchester Awards 2018.

The inaugural awards were handed out on Thursday 8 November at a high-profile awards ceremony at Manchester’s Deansgate Hilton hotel. Designed to celebrate the best of Manchester’s culture, food, business and sport, the awards attracted huge coverage on the night.

The Met were honoured to be shortlisted in three very competitive categories; Live Music Venue Of The Year (won by the Manchester Arena), Leading Live Event Of The Year for Head For The Hills (won by Bee In The City) and Leading Cultural Venue of The Year, in which we were chosen as the inaugural winners.

Judges praised The Met’s quality of programme and visitor experience, as well as our increased audience figures following the successful renovation project, and our ongoing commitment to engaging the community in Bury.

Artistic Director David Agnew, who collected the award on Thursday evening, said “We’re delighted to be recognised at these awards, and to represent Bury among so many high profile and deserving nominees.

“These awards show that the cultural offer is thriving outside of the city centre and that Bury has the ability to be considered among the most culturally relevant areas of Manchester.”

The expert judging panel included experts from sport, business, culture and the charity sector. For the full list of winners and nominees, go to www.thisismanchesterawards.com/winners-2018/ 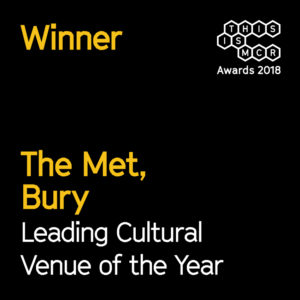